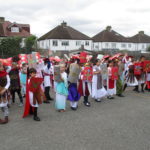 On Tuesday, Year 3 became Romans! They made Roman shields and used them in a mock training session outside as well as working collaboratively to make their very own mosaics.
They learnt about the different types of foods the Romans ate and followed a set of instructions to make Roman style oat cakes. They created Roman Menus and,at the end of the day, took part in a Roman Banquet. Here, they had the opportunity to try their oat cakes as well as lots of other foods such as, olives, grapes, apples and dates.